QuickTime and Screenshot are convenient to record screen on Mac, but they cannot offer much recording features. Therefore, if you want to record your Mac screen with more customization settings, try the handy FonePaw Screen Recorder.
Free Download Free Download

Recording Mac screen is a rigid demand for many Mac users, as there are usually occasions when you need to capture onscreen activities, such as recording online meetings, video tutorials, class presentations, gameplay videos, etc. This requires you to find tools that can let you screen record with audio on Mac.

The most common and convenient method is to use the built-in recording tools on Mac, for instance, QuickTime and Screenshot. With the 2 methods, you can do some basic screen recording tasks. But if you want to record the system sound properly while recording the screen, you may need another reliable capturing tool to do this job.

So, in this article, we will demonstrate three easy ways to record Mac screen for you: use a third-party recording tool that enables you to record full voice, or use Mac’s built-in QuickTime/Screenshot feature.

An Overview Table: 3 Methods to Screen Record on Mac with Audio

Here’s an overview table for you to have a quick understanding of the three methods to record the Mac screen in this passage.

⏰ This method can let you record: the Mac screen, external audio (internal audio is not available)

For Mac users, the most convenient way is to use its built-in screen recorder. if your Mac is in macOS Mojave or later, you can use the screenshot utility. This method has limited features, but you can control it flexibly. With a few hotkeys, you can easily finish your screen recording on Mac. The screenshot toolbar is available on almost all Mac OS, like Mac Pro, MacBook Pro, MacBook Air, etc. Let’s see how to do it:

Simply press Command+Shift+5, the screenshot floating bar will appear on your Mac desktop. There are several icons denoting different features, and that’s what each icon means. Basically, you can quickly capture a snapshot or a video with this tool.

As you can see, you can choose to record the whole screen or a selected portion on your Mac. Also, you can open the options and customize some other settings, for instance, the save location, timer, microphone, highlight features.

Note:
If you want to record the audio when recording the screen, choose the device in the “Microphone” column. But this method still cannot record the internal audio on Mac. 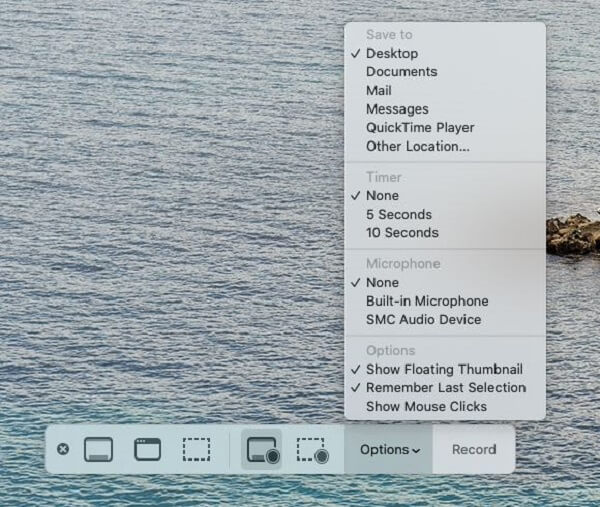 With all the settings done, hit the Record button to begin your recording. 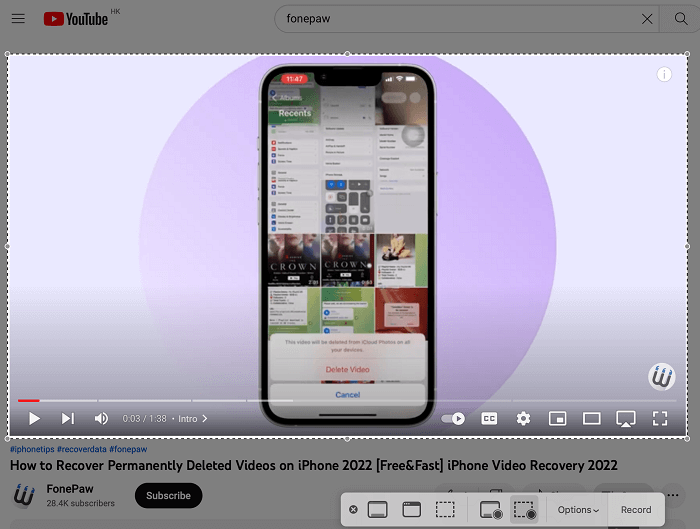 It’s also very easy to end the recording, but sometimes the End button is hard to notice. There are actually three ways:

Now you can check you recorded video on Mac at the saved location.

⏰ This method can let you record: the Mac screen, external audio (internal audio is not available by default)

Another way to record screen on Mac is to use QuickTime. It’s also Mac’s built-in recording program, you have no need to install any other application if you just want to record a video with your voiceover. If you find your Mac cannot launch the screenshot toolbar or is too old to use it, you can try this way.

By the way, if you don’t pursue high quality of the audio, you can also try recording the system voice by enabling the internal microphone function, which might fulfill your instant need.

Here’s how to use QuickTime to record screen on Mac:

On your iMac, MacBook, use Finder to locate QuickTime player and launch the program. 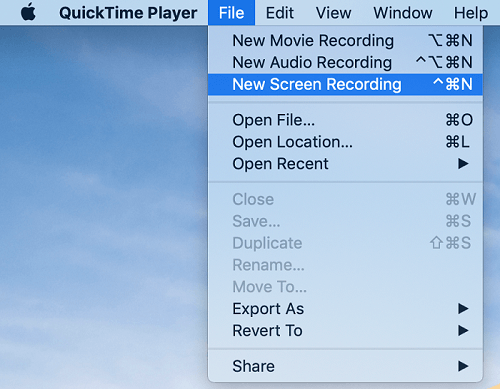 On the Screen Recording box, click the down arrow icon next to the record button. 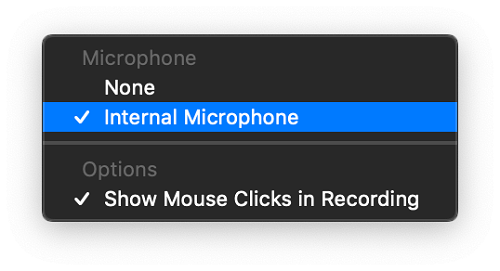 After setting up, click the red record button to begin capturing the Mac screen with sound. Then you will be asked to select the full screen or an customized area and click Start Recording. 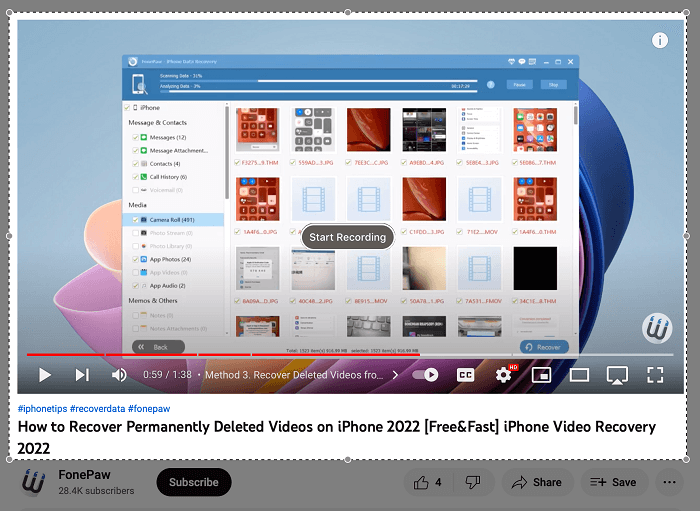 When you have captured everything you need with your Mac screen, you can click the record button again to stop the QuickTime screen recording. Or you can right-click on the QuickTime in the Dock and select Stop Recording. Finally, you can preview and save the video. 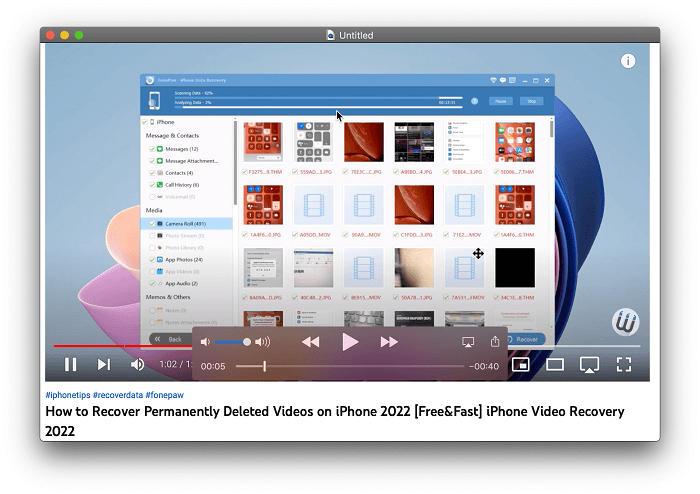 ⏰ This method can let you record: the Mac screen, external audio, and internal audio

By now you have learned 2 simple ways to record screen on Mac. But just as mentioned, using screenshot toolbar or QuickTime cannot record clear or high-quality internal or external audio, and they lack some useful recording features. So is there another way to record screen on Mac? How to screen record on Mac without QuickTime / Screenshot Toolbar?

The answer is to have a reliable third-party screen recording tool. If you want to record a personalized video with more output formats and effects, among various Mac screen recorders in the market, we highly recommend you one: FonePaw Screen Recorder.

FonePaw Screen Recorder is a professional recorder for iMac and MacBook. As a great alternative for Mac’s built-in recording tools, it can meet almost all your screen recording needs and is handy to use. If your Mac is Mac OS X 10.12 or later (Big Sur and Monterey also supported), don’t miss this useful screen recorder. Here are the main features of it:

Now let’s see how to use FonePaw Screen Recorder to screen record on Mac with sound. You can watch the video, or go directly to the text tutorial below which shows you the steps in detail.

The trial version allows all users to record 3 minutes of each video or audio to test the effect.

Customize the region that you want to capture, adjust the system sound volume, turn on/off the microphone/webcam, and set up hotkeys, etc. When you get ready for recording, click the REC button.

Your Mac screen is being captured so you can do anything that you tend to show in the recordings. You can adjust the voice volume of both computer system sound and the microphone as you like, and add annotations to highlight some important points.

Step 4. Save Screen Recording on Mac

As all things have been recorded, just hit the REC button again to stop capturing or use the hotkeys. Then, you can preview and trim the video with audio that you have captured.

Finally, you can save the video to the location you have set, and you can also easily find in in the Recording history of FonePaw. 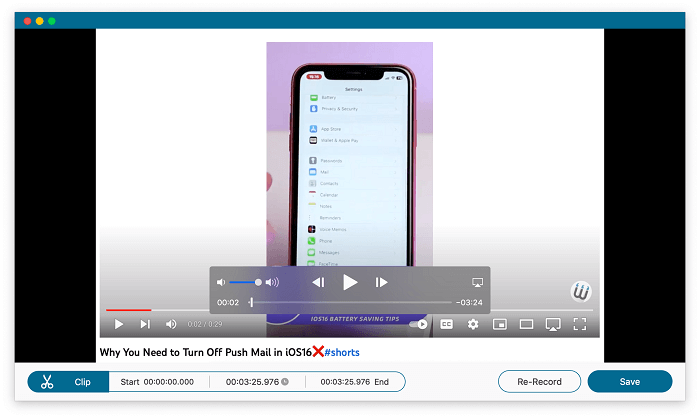 Above all are the three viable methods to record Mac with audio. The two built-in recording software on Mac – Screenshot Toolbar and QuickTime – are easy to use, but the restrictions like not recording internal audio are also clear. If you are always using the built-in recorder on Mac and is not satisfied with the limited recording features, you can now choose to use FonePaw Screen Recorder we’ve introduced to you.