How to Record Screen on Windows 10 [Easiest Guide]

Screen recording is one of the most convenient and popular ways for us to record useful information on PC. If you've searched on Google, you will know that you can record your screen on Windows 10 without downloading software because there is an existing tool called Xbox Game Bar. You will know how to use it in this post.

But if you've tried it, you will find that this tool can only help you with the most basic recording for just one window. Therefore, we will show you another way to record your screen on Windows 10, in which you can finish the recording with perfect features such as adding annotations and selecting windows to record…

1. How to Record Your Screen on Windows 10 with Annotations and Customization

Professional screen recorders are best for those who wish to record the screen when having an online course/meeting or making a video tutorial. Third-party screen recorders can provide the option to edit or add annotations on screen in real-time during the process. Also, they usually come with a game recording mode that can be extremely helpful when you want to capture and save your gaming highlights. With such kind of software, recording screen on your screen on Windows 10 can be flexible and convenient. In terms of professionality, FonePaw Screen Recorder will never disappoint you.

Having known so many features of FonePaw Screen Recorder, how do you record your screen on windows 10 with it? You will get to know that by the following guide.

Click the Download button below to get the 60fps screen recorder on your Windows 10 computer. If you want to recommend this software to your friends who use a Mac computer, you can also record screen on Mac.

Step 2. Launch the Software and Go to Video Recorder

After you get this tool running, you will see multiple gadgets on the homepage. Click Video Recorder and you will reach the setting page for the screen recording. The Game Recorder requires administrator privileges. Recording your gameplay with a Game Recorder instead of a Video Recorder allows you to get a game recording without lag.

Step 3. Set up for the Screen Recording on Windows 10

Select a recording region for the recording and turn on the system sound or the microphone sound depending on your actual needs. If you need some advanced setting such as customizing a recording region, excluding some windows that you don't need to record, enhancing the microphone, and selecting output formats as GIF, you can check them here after step 5.

After finishing the setup, click the Rec. button and start to screen record. There are some bonus actions you can take on the floating bar during the recording:

Step 5. Cut and Save the Recording

When you are done recording, click Stop. A window of recording previewing will pop up. You can preview it to see if the recording is perfect or trim your recording here with a paid version. After everything is done, tap Save. 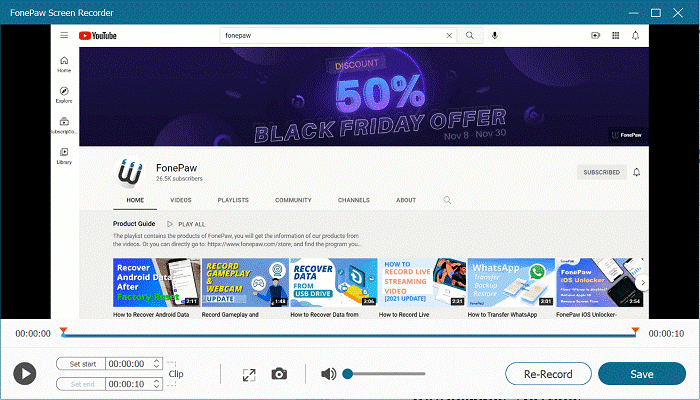 But if wish to make the screen recording as perfect as you want, before getting it started, customize the settings for the details below:

You can directly choose Fullscreen to record or customize the recording area by clicking Custom. This FonePaw Screen Recorder allows you to select a region/window or some popular dimensions in the drop-down menu of Custom.

-Select the windows to record

Go back to the recording page and you will see the Advanced Recorder settings under the Rec button. You can exclude some windows for the recording to avoid screen recording being covered up by unnecessary windows. 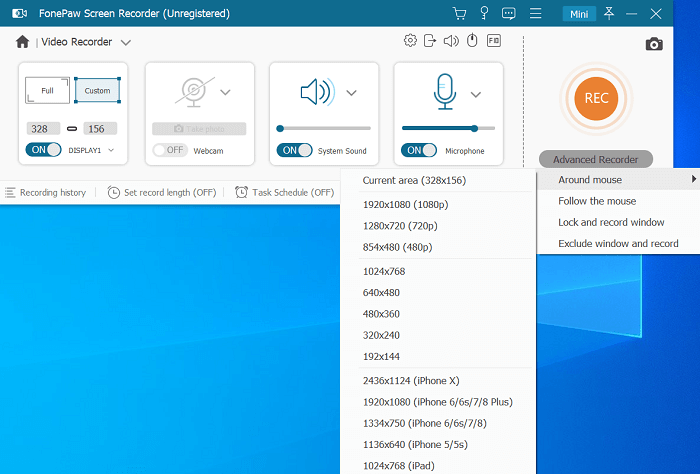 If you are to record an online course or meeting on Windows 10, you may just need to turn on the system sound without the microphone on to avoid some noises being recorded along with the recording. At the same time, you can cancel noises of your microphone if you click the speaker icon and hit Sound check in the drop-down list. 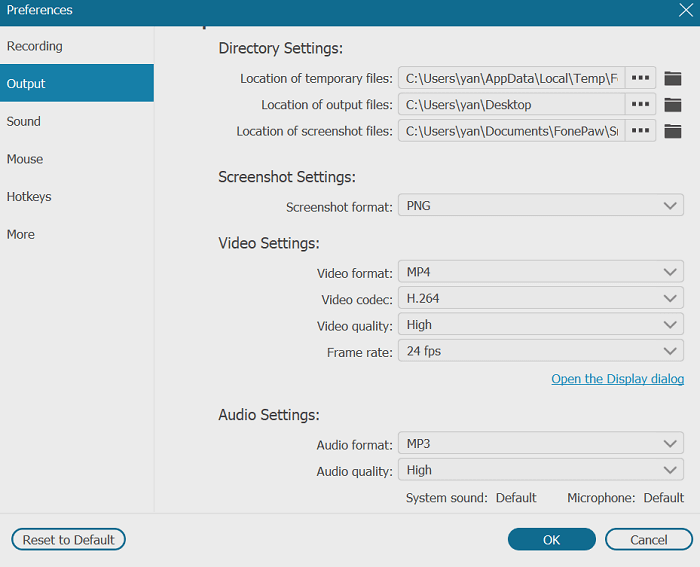 Step 1. Get your game window ready and press “Win+G” on the keyboard, and you will see the Xbox recorder;

Step 2. Unmute the microphone on the Capture pane if you need to record your voice in the screen recording. Then hit “Win+Alt+R”;

2. [Tips] How to Record Your Screen and Yourself on Windows 10

We've covered how to record your screen on Windows 10 on both FonePaw Screen recorder and Xbox Game Bar. Besides recording screen, in fact, you can record your webcam and screen at the same time on Windows 10? Let's see how it works!

When you are recording a tutorial video, you may ask how to record your screen and yourself on Windows 10. Then turn on the Webcam when recording your screen with FonePaw Screen Recorder and you will see a window showing you through the camera. You can also select the webcam device, resolution, window position and transparency of the window showing you.

Record Yourself on Windows 10 With App Camera

There is a camera app on your computer and if your camera device is working fine, you can achieve that with some quick steps.

Step 2. Click the "Recording icon" on the right pane to start recording;

Step 3. Hit "Stop" and you can find the recording in the folder by path: C:\Users\X\Pictures\Camera Roll (replace X with your user name).

There's another way for you to make a video of yourself. That's using FonePaw Screen Recorder. You can do that with the following steps after launching this recorder.

Step 1. Hit the Webcam on the homepage;

Step 2. Set up for the recording by selecting your Webcam device, resolution, microphone or rotating the screen if you want to;

We've covered how to screen record on PC with audio with two methods, i.e., with and without game bar. Xbox is the best for Windows 10 game recording and FonePaw Screen Recorder is the first choice if you want to record your screen with some annotations or multi-windows or other functions.