If you are a game lover, you must also be familiar with the game streaming videos or clips sharing on some platforms like YouTube and Twitch. MMO, MOBA, FPS…there are so many types of games we can enjoy, join with others, and share with more people. When you want to record and share your gameplay videos, you will need a game recorder.

However, not all game recorders can work as you expect. Some may record with dropping FPS, while some cannot record the webcam or even add ugly watermarks on your recordings. How to find the best game recorder that you just need? This post collects 8 good screen recorder for gaming that you may like and will introduce to you in detail. 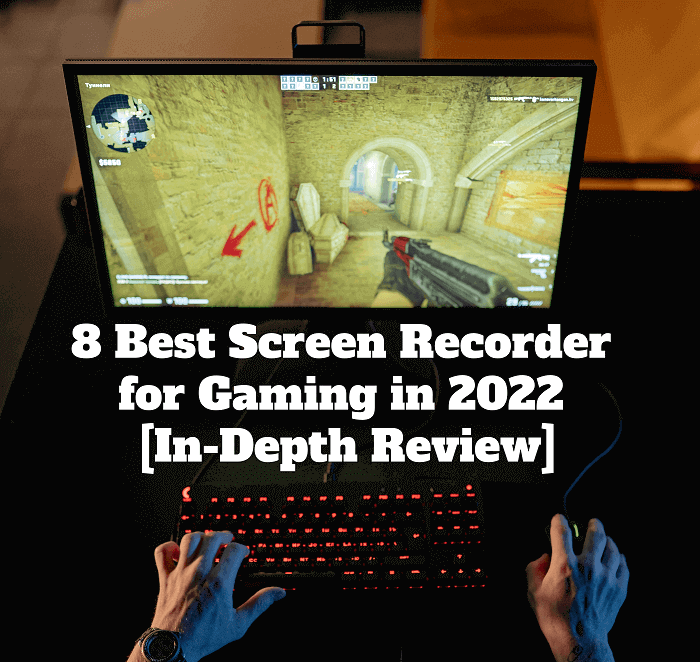 How Do We Choose the Best Game Recorders?

In order to guarantee that our recommended best game recorders are the ones you will need, here we conclude the factors that we consider while choosing the best screen recorders for gaming:

Excellent games usually come with beautiful graphics and high FPS. To retain the quality of the game screen, a good game recorder should be able to capture the gaming process with high resolutions and no FPS drop

Although a screen recorder is good at video quality, it will also make you anxious when the recording is laggy. So, it will be good that the software occupies a low CPU and can lead to a smooth gaming recording process.

When we record gameplay videos, we usually record the game screen with the webcam or doing live streaming. Therefore, a screen recorder compatible with webcam and live stream recording functionality would be better.

A screen recorder that contains good features for conveniently recording game videos will earn extra points, like supporting hotkeys to flexibly control the gameplay recording, or being able to record only the gameplay video and excluding to record other running programs.

8 Best Screen Recorder for Gaming of 2022

Now, just keep reading to find out the best-recommended software to record gaming on desktops.

As the top 1 pick game recorder, FonePaw Screen Recorder stands out for its easy-to-grasp functionality in recording any activity on screen. It is able to capture gaming moments with original resolution and up to 60 FPS. It's also designed as a lightweight program that enables a low CPU for ensuring the smooth recording process without any lagging during the gameplay.

FonePaw Screen Recorder is also equipped with helpful features to enable more convenient control on recording gaming, such as the hotkeys control, with which users are able to use the keyboard to control the gaming recordings flexibly. In addition, the flexible customization on adjusting the recording area and sound volume also enable users to save the gaming recordings in the best state they desire. Users are also available to select the fix gaming window for recording only! 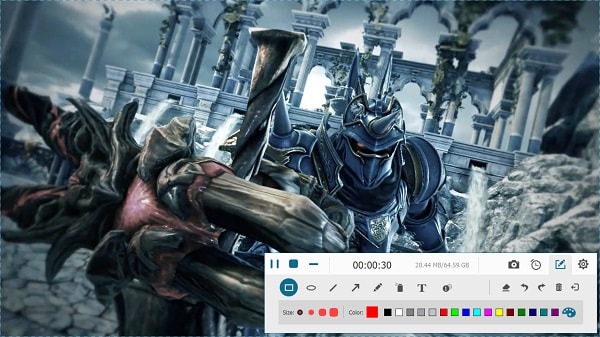 It would be hassle-free for Windows 10 users to record the gaming moments, as the system has provided the built-in Windows Game DVR for video game players to use for recording the gameplay on desktops. It is compatible with UWP games recording, which may be lacking in many other screen recording software.

Users only need to awake the recording feature by pressing the default shortcut of "Win + Alt + R" to specify the 30fps or 60fps gaming recording in the standard 720p or higher 1080p HD resolutions. Despite this, this built-in functionality launched by Windows 10 only takes a low CPU, so users won't feel the performance of your desktops lagging behind while recording the gaming process. 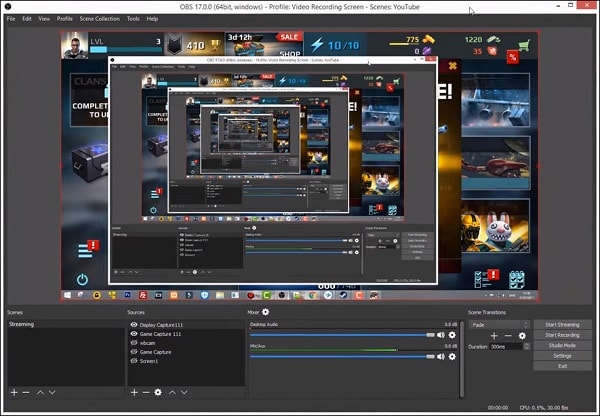 OBS Studio is an open-source recording software developed for desktop users to freely capture the screen without any restriction. It is compatible with both streaming and recording tasks with high resolutions, and it won't set limitations on the length of the recordings you are going to have.

Although OBS Studio would perform weaker at taking a screenshot, its screen recording functionality can be highly guaranteed. As the software is able to directly record from the graphics card, it works to record gaming in full-screen mode with hotkeys in a flexible way. Additionally, OBS Studio will not take one single CPU, but make full use of multiple of them to ensure the smooth recording performance during the gaming process, and also record the gameplay at 60fps, or even higher.

To help save the storage space for video game players with high gaming recording demands, Bandicam also applies a built-in compression feature, enabling users to save the high-resolution recordings without sacrificing the storage space at all. It will smartly balance the quality and file size to bring you the perfect outcomes for saving your gaming recordings for convenient upload, sharing, preserving, and storing. 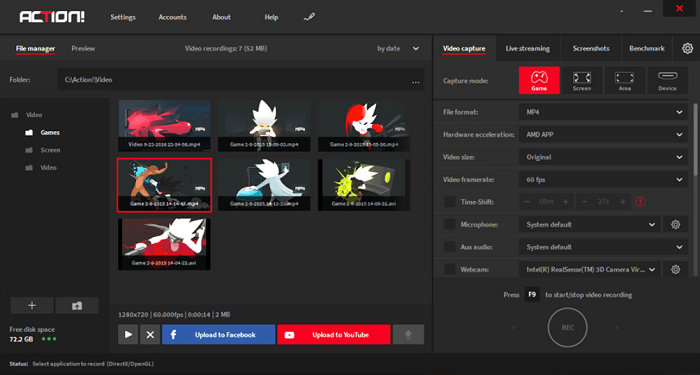 Developed by a leading brand Mirillis, Action! is also an out-performing screen recorder for gaming, which supports recording gaming with a webcam overlay to the recording gaming. It enables users to flexibly switch back and forth from the full-screen gameplay while processing the recording without any interruption. Additionally, it even allows users to control the recording through the Action! mobile app!

For its recording performance, Action! has been empowered by VIDIA, AMD, or Intel hardware acceleration to ensure the no-lagging performance while processing the gaming recording. In addition, its output quality is able to reach up to 4K, with a high frame rate to greatly ensure the original quality of the gameplay videos.

An amazing functionality for gaming live streamers is that Action! supports streaming the recordings through popular platforms, including YouTube, Twitch, Livestream, etc., enabling users to instantly share the moments with players from all over the world. 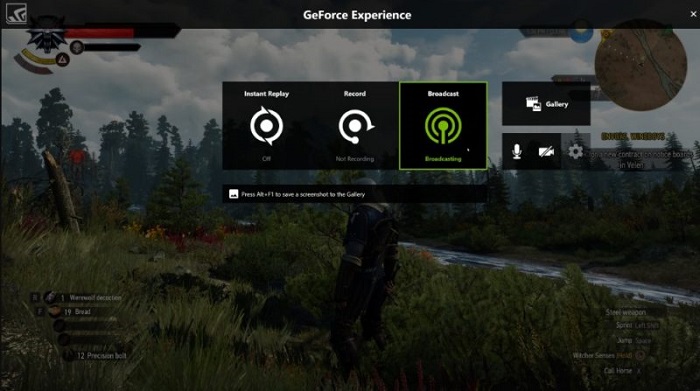 If your computer is equipped with an NVIDIA graphics card, the ShadowPlay screen record developed by NVIDIA is an ideal pick to help handle the gaming recording with excellent performance. Despite its basic features, for example, it is cost-free and offers an intuitive UI, ShadowPlay is also popular for its high recording resolutions supported for video game players to trust. The best resolutions supported by ShadowPlay is able to reach the highest 8K at 30FPS, or 4K at 60FPS to ensure the quality-guaranteed outputs.

Additionally, ShadowPlay also ensures the no-lagging performance so that the recording is able to be processed without affecting your gaming process, thus, the output recordings can be maintained at the best visual quality for sharing or uploading.

Also, here are 3 more highlights that ShadowPlay is able to bring to its users with gaming recording demands. Firstly, it is able to help broadcast the gaming moments and live stream them to social live streaming platforms such as Facebook Live, YouTube Live, or Twitch. Secondly, the instant reply functionality is able to help save the last 30 seconds of the gaming recording all the time. Last but not least, ShadowPlay also enables users to generate GIFs with up to 15 seconds from the captured gaming moments to the best 8K for preserving locally. 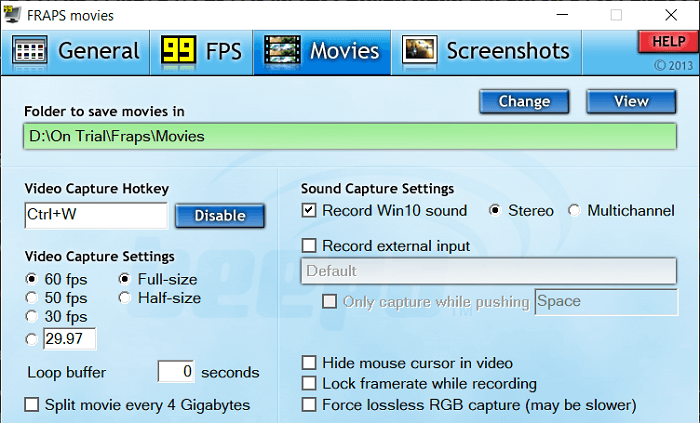 Firstly launched in 1999, Fraps has been one of the gaming recorders with a long history and a large number of users basic. For decades, Fraps has provided its out-performing functionality to record gaming on Windows devices. It focuses on taking screenshots and video recording, hence, the software is developed at a lightweight condition, which will not take a higher CPU while processing the gaming recording when it is running.

Don't worry about the output quality, as Fraps has been always keeping up with users' demands in the modern world for meeting most needs. Fraps enable users to set up the frame rate accordingly, which is ranging from 30 to 120FPS. Therefore, for the high-quality video game recording, Fraps is absolutely able to fit the needs. 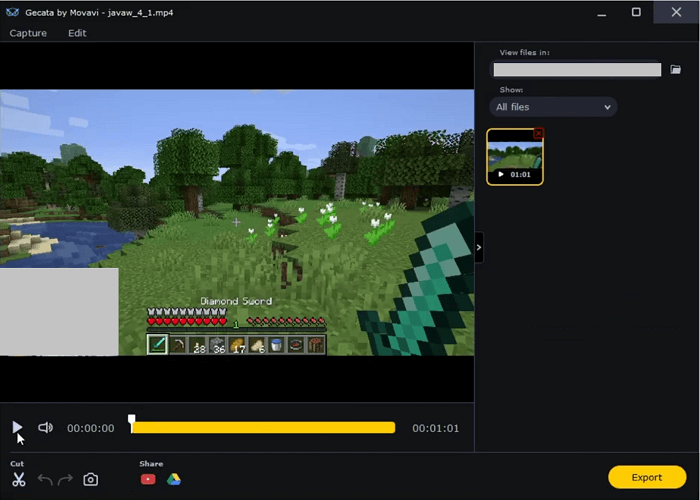 Movavi also developed a special video recorder to record games on Windows desktops with high resolution. For the gaming recordings, the video resolution is able to reach 4K at max, and also up to 120FPS. Despite the high-quality gaming recording functionality, Gecata also enables users to broadcast and stream the window while processing the recording.

Gecata provides an intuitive interface, enabling the software quite easy to grasp even if you are a starter trying to record gaming for the first time. In addition, with the helpful hotkeys provided, controlling the gaming recording would be even more convenient, without interrupting the gaming at all.

Amazingly, Gecata allows users to save and edit different audio streams separately without combining them together. In this way, you don't need to worry about interrupting the game audio while processing the gaming recording.

After reading this in-depth review of the 8 best screen recorders for gaming on desktops, have you grasped the most ideal pick for yourself now? Concluded from all aspects, these screen recorders are the best options for recording gameplay without lagging but in high resolutions. You can select any of them and try!