If you have rooted your Android devices, you must have heard of SuperSU or other root permission managers like Kingroot(Kinguser), Kingoroot, PHH Superuser. But do you really know the functions of these root permission tools? What's the use of SuperSu? And what's the difference between SuperSU and other superuser/supersu apps? In this post, these puzzles will all be solved.

What is Android Root Management?

After your Android devices have been rooted, every app in the device will ask for root privilege when it is needed. Therefore, you need a tool to manage root access permissions for all the apps to protect your phone's safety and privacy, for example, preventing the threat of malware. Normally, when rooting a phone, it also involves installing an app for managing root access permissions, which is usually Superuser or SuperSU, the two best apps in managing root settings.

What is the Use of SuperSU?

SuperSU is now the most widely used root permission manager in the rooted Android world. In the description of its developer ChainfireXDA, it "allows for advanced management of Superuser access rights for all the apps on your device that need root."

With powerful features and user-friendly interface, SuperSu can make it easy for you to manage root access on your Android device. Here are the main uses of SuperSu: 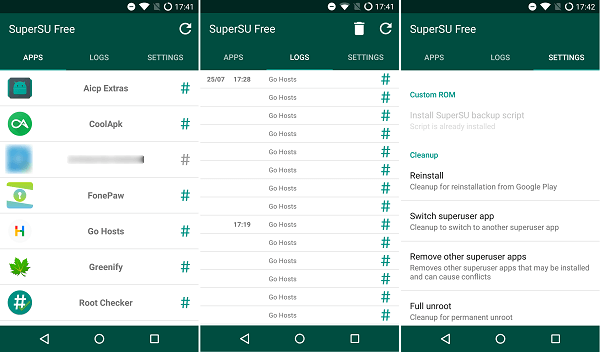 SuperSu comes with two versions: the free version and paid version. The different between SuperSu Free and SuperSu Pro is that SuperSU Pro provides advanced features such as keeping root rights after a system update, password protection and advanced log configuration settings for each application. You can get SuperSU Pro in Google Play Store in $3.75.

SuperSU VS Kingroot & SuperSu VS Superuser

Besides SuperSu, there are other root access management apps, such as Kingroot (Kinguser), Superuser by ChainsDD, Superuser by Clockworkmode, the new PHH's SuperUser. Let's see how these superuser apps differ from SuperSU.

If you root your device with Kingroot APK, you may find Kingroot or Kinguser app installed on your device after rooting. The Kingroot (Kinguser) can also manage root access on your Android phone. But still some users would like to replace Kingroot with SuperSu because Kingroot is incompatible with some apps and doesn't perform properly when granting root access to some apps.

Overall, SuperSu is a more powerful root management tool than Kingroot and other superuser apps because SuperSu has the best root command compatibility and never fail to give root access to any app on any Android device. If you are using Kingroot or Superuser, you can always replace the superuser/kinguser app by downloading SuperSu from Play Store.

Tip: Need to get your phone rooted first? Here is how to root an Android phone (opens new window).