How to Move Apps to an SD Card on Android

Summary: In this guide, you will see how to easily move apps from internal menery on Android to a SD card. In this way, you can release the storage space on Android. Now, just scroll down the screen and check the details.

For those who have Smartphones with a small amount of storage (e.g. 16 or 32GB of internal memory), they often find that their phones don't have enough space for as many apps as they want. If this is a Android phone that supports expandable storage, for example, Samsung Galaxy S8/S7/S5/J7/J5, you can insert a microSD card and move apps to the SD card to make room for more apps. This post is going to show you how to move apps to SD card as well as why there are some apps unable to be moved to the external memory.

Note: The specific steps may be different in Android devices of different brands and models. 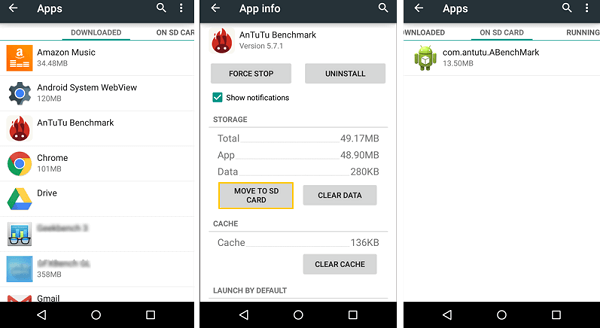 Step 1. Go to Settings > Applications (Apps for some stock Android device like Nexus.)

Step 2. Tap Application manager and choose the app that you want to move to SD card.

Step 4. The phone will begin to move the app from internal memory to external storage. When it is done, the "Move to SD Card" button will change to "Move to Device Storage".

If an app can't be move to SD card, you will see that the "Move to SD Card" button greys out. Jump to part 3 to learn about Why can't Some Android Apps be Moved to SD Card? (opens new window)

Use SD Card as Internal Storage

If your Android phone runs on Android Marshmallow and above, you can adopt SD card as internal storage and then move apps to the SD card. You can even install new apps to your SD card by default as long as the app developer allows it.

Before adopting SD card as internal storage, you should keep these tips on mind: 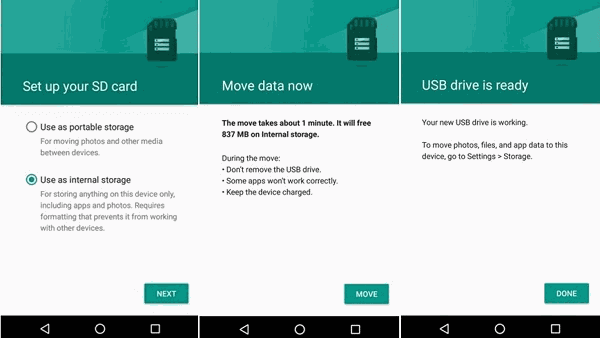 Step 1. Insert your microSD card into your phone.

Step 2. The phone will give an notification saying that "New SD card detected". Tap Set Up.

Step 3. You'll be given two options. Choose "Use as internal storage" and tap Next.

Step 4. The phone will warn you that formatting will erase all data on the SD card. Tap Erase & Format.

Step 5. The phone will begin to format the SD card. It could take a while.

Step 6. After the SD card is formatted, you'll asked whether to move your apps, photos, and other data to the SD card right now.

Step 7. Tap Move now. Some apps and other files will be transferred to the SD card and the card will become the preferred storage location for all apps and files.

Step 1. Connect your Android phone to the computer. You need to enable USB debugging and connected the phone as MTP device so that the computer can detect the phone.

Step 6. It will take a wile for the computer to execute the partition command. Wait till you see that the shell command line appears again.

Step 7. You can now go to Settings > Storage and migrate apps or files in your internal memory to the SD card.

Why Some Android Apps Can't be Moved to SD Card?

Why can't some android apps be moved to SD card? Isn't it better if all apps are movable and users can get more space? Before blaming the "stupid" developers, you may want to know the reasons behind.

Therefore, to free up internal memory, you should only move those big games or other movable apps to the SD card. If you really want to move those ‘unmovable' apps to SD card and don't care about security, data loss or apps malfunction, there are some root methods that can help you.

Any other question about moving apps to SD card, leave a comment.