The followings are how to make a robot voice with a recorded file or typing text.

There are a few video/audio editors that can change voices for a recording file, for example, Audacity. However, making a robot voice with editors like Audacity is time-consuming as you have to configure the voice filter manually to generate a robot voice.

This post will introduce a robot voice changer with preset voice effects to make a robot voice in one click. That's Icecream Video Editor (opens new window), which provides different pitches and tones to a chipmunk, to a robot, chorus, and more.

As a full-featured media editor, Icecream Video Editor can not only change voices but also cut video and audio files, adjust speed (opens new window), volume, and other elements of a video or audio, provide effects/color filters, etc.

With Icecream Video Editor, you can not only make voices sound like a robot, but also edit the video/audio in the way you like.

If you want to generate a robot voice from recording, you should first record an audio file (opens new window) with a voice recorder. There is a built-in voice recording tool called Voice Recorder on your Windows computer.

If you don't want to speak out the words by yourself, use a free online TTS(Text-to-Speech) service to type the words and convert the text to an audio file.

When you have a video or audio file ready, you can begin to make a robot voice with Icecream Video Editor.

Add an audio file or a video with audio to Icecream Video Editor. 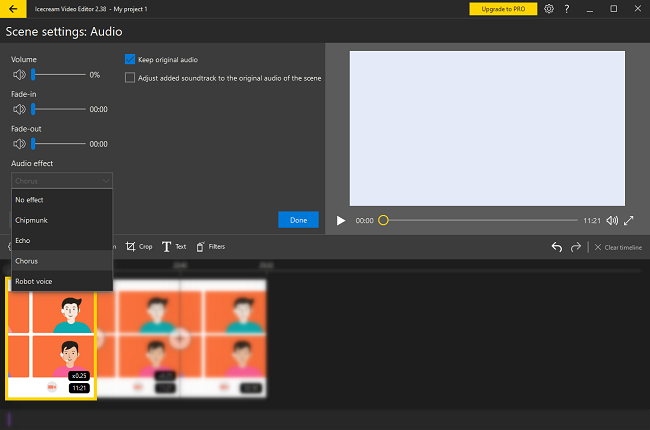 Besides, you can also use other audio effects, such as chorus, echo to improve the voices in your project. Or use powerful video editing features such as adding filters, slow motion, special effects, subtitles, etc., to improve the video.

Finally, output video or audio to save them locally. Audio can be saved in MP3 formats. 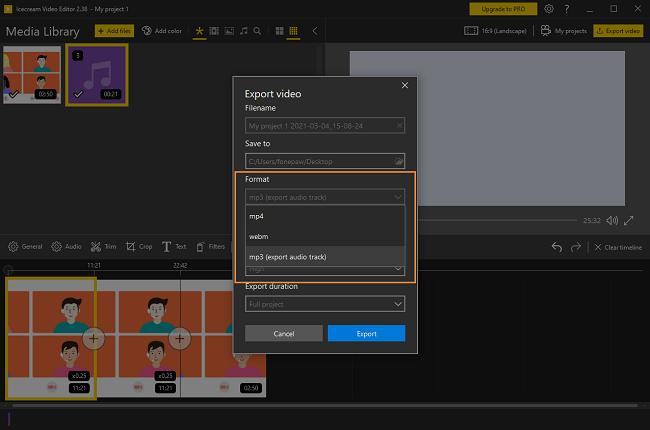 This is an online robot voice generator that can generate robot voice from text. That's Lingojam Robot Voice Generator. The online voice changer is free to use.

Step 1: Open this realistic robot voice generator with a browser on your computer or mobile phone.

Step 2: Enter the text which you want to convert to robot voice in the input box on the left (supports English only).

Step 3: On the right, you can then adjust the speech speed and pitch.

Step 4: Click Speak and wait a minute or two then you will have a robot voice from the text.