Fraps is a screen recording software and benchmarking tool which can count FPS (Frame per Second). Its recorded videos are of high quality and adjustable FPS. However, there is only Fraps for Windows and it is a pity there is no Fraps for Mac for MacBook or iMac users. Luckily, there are still other alternatives to Fraps on Mac.

To capture screen and record screen video on Mac, you can install FonePaw Screen Recorder for Mac, which lets you take screenshots, video capture during gameplay without Fraps screen recorder.

To replace Fraps FPS counter, you can download Count It, a framerate counter for gaming available for Mac users.

The two Fraps alternatives for Mac can achieve the same performance or even better. Now let's have a look at how to install and use FonePaw Screen Recorder and Count It.

You can start it quickly without a tutorial. Let's begin!

A few steps to start:

Step 1: Download the FonePaw Screen Recorder for Mac version and install it on your MacBook/iMac.

Step 2: Click its icon on the desktop and you will see a concise floating panel.

Step 5: After recording what you want, hit the stop button and the video will be automatically saved as MP4 format in the selected path which you can change in settings. 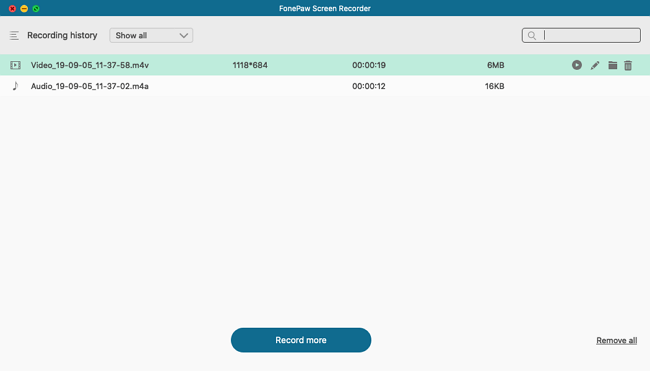 More highlights about it…

Count It is a very good alternative for Fraps FPS counter. The app collectsframerate stats of the chosen app over time, displays them on a graph, and helps you figure out what tweaks of your system or apps may drag its performance down or boost it.

Installing these two apps effectively substitute Fraps or even outdo it on MacBook. You can share with your friends with MacBooks.