The 'Screen Overlay Detected' message was found on Samsung S8/S7/Note 8, LG, Pixel and many other Android phones that run on Android Marshmallow and above. This article will show you how to fix screen overlay detected with effective solutions that have been tested by thousands of users.

# What Is Screen Overlay Detected?

Screen overlay, also known as the feature called draw over other apps, is an advanced function coming with certain apps which allow the apps to draw over other apps - that is to cover or create some stuff to appear on the other apps. For example, Facebook Messenger Chat Head can inform you of a newly received message when you are watching a movie on Netflix or playing a game. That's screen overlay (Draw over other apps) feature is working. In fact, it is a dangerous feature. Imagine this: some malicious apps create some things to cover your screen while you are using other apps so that they can trick you into tapping buttons that they want you to press. Therefore, the Android system is strict with screen overlay permission for the sake of users' interests. Normally, the app cannot get screen overlay permission unless you grant it to the app.

And once the screen overlay feature is active, the Android system will not allow you to make sensitive changes, such as granting permissions for an app, on your phone for your security. For instance, when you are trying to give location permission to a recently installed app when Facebook Chat Head is active, the "Screen Overlay Detected" message will pop up, stopping you from granting the permission. To conclude, screen overlay detected issue is a conflict between apps with screen overly permission and the newly installed apps asking for permissions.

# How to Fix Screen Overlay Detected on Samsung, LG, Lenovo and Others

As you have known why this 'screen overlay detected' message comes up, you can try to stop the screen overlay from launching with the following methods.

This method is to help you withdraw the permission of screen overlay granted to the apps. The specific operation may differ from phone to phone. Below I will introduce how to disable screen overlay on Samsung, LG, Pixel and more.

Step 1: Tap the gear icon to open Setting on the homepage.

Step 3: Press "More" which appears at the top right corner of the interface.

Step 4: Select "Apps that can Appear on Top".

Step 5: Click "More" again in the same position and select "Show System Apps".(This step is to show more apps with screen overlay permission. If you have found the app which causes the problem, you can directly go to Step 6).

Step 6: Now you can see all apps which have been granted the permission of screen overlay. If you are sure of which app is creating a screen overlay detected message, just toggle the button beside the app to close its permission. If not, close them all one by one.

Turn off Screen Overlay on LG

Step 3: Tap the three-dots icon on the top right corner of the screen.

Step 4: Click on "Configure Apps" and select "Draw Over Other Apps" on the new interface.

Step 6: Now you can see the whole list of screen overlay apps and close them accordingly.

On Android Oreo: Go to Settings > "Apps & Notifications" > "Advanced" > "Special app access" > "Display Over Other Apps". Turn off screen overlay for the apps that may be preventing you from giving app permission.

If you don't want to waste many efforts to manage apps permission, you can directly uninstall the unused apps possibly with screen overlay. Screen Overlay feature is often used by some unwanted security and cleaner apps. Below is a list of apps which can possibly cause screen overlay detected issue on Android device:

If the above workarounds are not useful because you are not sure which app is causing the screen overlay detected conflict, then you can manage permission in the "Safe Mode", in which all third-party apps are disabled on your phone. Different versions of smartphones have different ways to enter into safe mode. I will introduce how to enter Safe mode on devices of Android 6.0 or later and you can search online if this way doesn't suit your phone.

Step 1: Press and hold the power button of your phone until "Power off" appears on the screen.

Step 2: Tap and hold the "Power off" for seconds until a pop-up prompt asks you to confirm whether you want to enter into safe mode.

Step 3: Tap "Ok" and your phone will restart into safe mode. 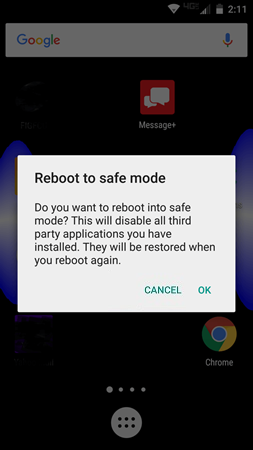 After entering into safe mode, you can go to Settings > Apps and give permissions to whatever app you want to use but can't because of the "Screen Overlay Detected" message.