Quickly find the answer to the frequently-asked questions here and get the useful resource about Android Data Recovery.

Unfold and try the given solution to the question that you are encounting.

Get practical tips about using FonePaw software or service.

Recover the registration code with your email address and order ID.

If you need personal help, leave your messages here.

1. Why is my device not recognized?

As for your case, please do as following steps to fix it:

1. Please uninstall your current program first and then download the latest program from the link below:
https://dl.fonepaw.com/android-data-recovery.exe

2. Please enable the USB Debugging. If you don't know how to do, please refer to this tutorial:
How to Enable USB Debugging on Android Phone

3. Connect your device to your computer via USB cable and drag down the dropdown menu. then choose "MTP" mode or "PTP" mode.
For LG devices, they can be connected under Camera (PTP) / Send images (PTP) mode ONLY. See below:

4. Re-plug your USB cable to connect the device.

2. What can I do if FonePaw Android Data Recovery fails to root my device?

FonePaw Android Data Recovery can root most devices running Android 4.x. If the rooting fails, you can go to "Advanced Root" to follow the tips helping you root manually.

For most Android phone:
/root-android-device.html

For LG device only:
/root-lg-device.html

For Samsung device in particular:
/solution/root-samsung-phone.html

There's risk rooting Android, there are still many Android users try ways to root their Android because many tempting benefits are waiting for you:

1) Manage apps. You can move the apps from phone memory to SD card and you can even remove the pre-installed apps in order to set free more space for you.

2) Save battery. Stop apps from running on your phone automatically which will drains your battery.

3) Mute the notification or advertisements. It will give you a peaceful life without being annoyed by notifications and ads when using Android.

4) Download useful third-party apps. After rooting, you can not only download apps from Google Play, but also from other third-party apps designed by other manufacturers.

1) If not well handled, there may have some wrongs during the rooting, which will brick your Android. But don't be nervous. It is pretty unlikely.

3) There's still another possibility that your acts wired after the root and you are just kept failing when upgrading the latest updates from your OEM.

4. Should the device be authorized?

Yes! Some devices need to be authorized when being connected to computer. The hint of "Always allow from this computer" will pop up on your device. If there is no related information about the prompt box due to some other operations, please connect the device again. 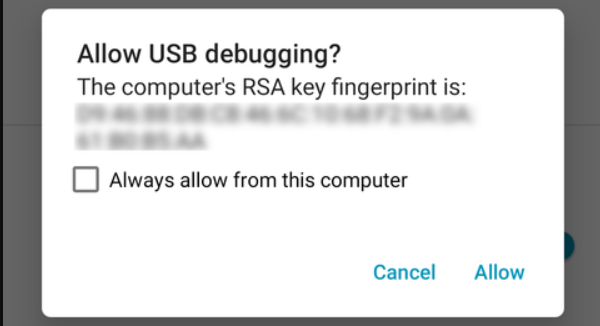 5. How can I open the USB Debugging Mode?

Open the USB Debugging Mode in correctly, you should follow it below according to your Android OS:

For Android 4.2 or later

3. Find Build Number and tap it for 7 times continuously.

6. How can I install the device driver?

Step 1. When connecting the Android device to program, there will be a hint pop up to install the driver first if the driver detected failed.

Step 2. If the driver has been installed successfully but not connect, you are supposed to check whether the driver, which you can find the driver in Computer - Properties - Device Manager - Android Phone, is disabled under Device Manager.

If all processes are on right way, then click Enable and the device will be connected to the computer successfully.

7. How can I find the prompt of "Allow Super User Request"?

FonePaw Android Data Recovery is required to get privilege to scan more deleted files. If your Android device receives no Superuser Request, please go back to your computer and continuously click the "Retry" button for three times. Still failed? Please download an access management app to your device. 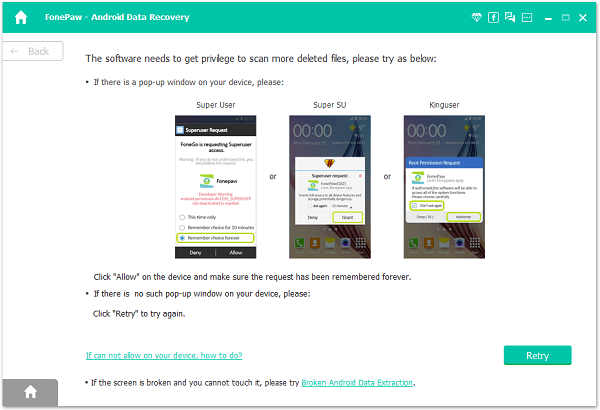 When you have downloaded and installed the app, please follow steps below to make sure it can be set successfully and then click "Next" button to continue.

Super User: Find the Super User app on device > Under the Apps, find the "FonePaw" > Click "Remove" to delete all logs. 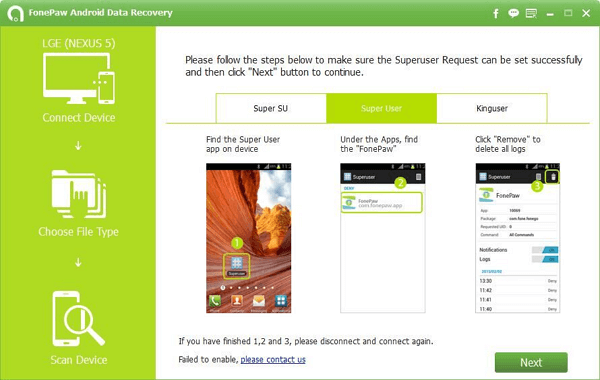 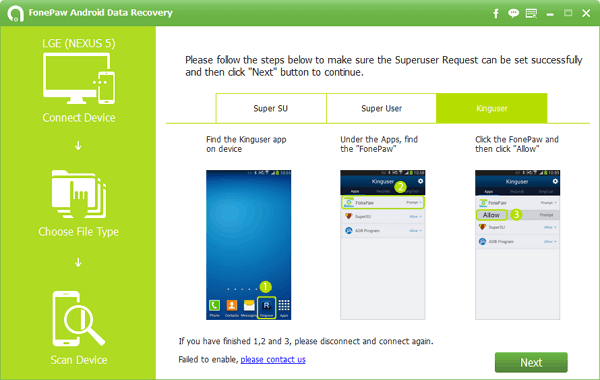 If it still doesn't work, please let us know the following info

Please click the Feedback icon on top right corner of the program to submit the log files to us. After sending the log, please tell us the email address for sending. Thank you very much for your kind understanding.

8. How can I deal with the frozen/crashed program during the scanning process?

If the software gets frozen or crashed during scanning and analyzing, please try the following tips:

1) Stop and reinstall the program.

2) If possible, try to install and run the software on another computer.

1) May I know your operating steps?

2) Please kindly send a screenshot of the program interface to us.

3) And what file type are you recovering? videos, photos, or messgaes? Or?

9. Why does the program take so long to scan lost data?

Sometimes FonePaw Android Data Recovery takes some time to scan the lost data. Here is the instruction to speed up the process:

Step 1. Stop any anti-virus software and Android management software when running the FonePaw Android Data Recovery. No worries. All our products are 100% clean and have been verified by Norton and McAfee.

Step 2. Restart the program. After analyzing device successfully, click the "Next" button. Then you'll be asked to select file types: photos, videos, messages, contacts, etc. to scan. You can agree to choose the defaulted "Select All". But to save scanning time, it is suggested to check the ones that you need to recover from your device.

10. Why does the program find no deleted data after scanning?

When FonePaw Android Data Recovery analysis your device, did you see the interface of rooting failed and you just click "Continue Scanning" but not "Manually Root"? If yes, please choose "Manually Root". Actually, the program will scan data in a more in-dept level after Android device rooting. Here is the guide to root Android:

11. I can only find the thumbnail after scanning.

You have no permissions to preview the full photos but the thumbnail with the trial version. Please buy Android Data Recovery if you mean to preview them in full size.

12. Why can't FonePaw Android Data Recovery run on my phone?

Except portable devices, FonePaw Android Data Recovery runs on PC only. You are required to install the software on the computer and then proceed with the recovery steps by connecting your phones to PC.

13. Why can't I register the program successfully?

1. Please check and comfirm your email address and registration code whether you typed/pasted correctly.

2. Please check whether you download the correct version of program.

3. The installation and registration of program should be in the condition of Internet.

4. Any error message you got? If yes, send the screenshot to [email protected] to analyse and solve.

14. How long does it take to analyze further data?

The duration of the analyzing and recovery process depend on many factors, e.g: phone model, the amount of data, network condition, etc. Thus, it would take different time to do recovery on different phones but generally, it won't take too much time.