How to Root/Unroot Android Using Framaroot in 10 Seconds

STEP 2 Root Android using Framaroot. Open Framaroot on the phone, from the drop-down list, choose "Install SuperSU". Then select one of the exploits (Gandalf, Boromir, Pippin, Legolas, Sam, Frodo, Aragorn and Gimli) that fits your device. After that, the application will start to root your device and you have to reboot the device after it is successfully rooted.

Tip: If there is a popup saying "Your device seems not vulnerable to exploit included in Framaroot", in this case you can just uninstall Framaroot.

When you need to unroot your rooted phone, just launch Framaroot on your phone, and choose "Unroot" from the drop-down list. In 10 second, your Android phone will get back to the unrooted status. 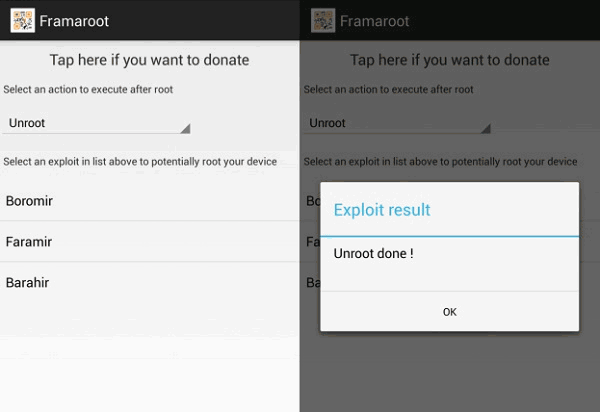 With Framaroot, it is just a piece of cake to root and unroot your phone, right? Have a try with the application and tell us about your experience.