When people's working lives are moved over the Internet in the past years, Microsoft Teams also became a vital platform for enterprises to keep employees stay in tight collaboration online. As more important conferences are hosted through Microsoft Teams, people wonder if there are ways to record the meetings for preventing missing important notes mentioned in the conferences.

Therefore, this post would guide you with the step-by-step manipulation tutorial to record Microsoft Teams meetings with or without notifications. Please scroll down and continue reading if you also need help.

1. Can You Record Microsoft Teams Meetings?

For facilitating the high-efficient online conference progress, Teams has provided a built-in feature for people to record Teams meetings without depending on third-party programs to help. However, this feature comes with restrictions, as not all meeting participants could process the meeting record. The following table demonstrates the possibility of different users recording Teams meetings:

2. How to Record a Meeting in Teams for Free

As you've already known, Microsoft Teams actually provide the option to record your participated meeting. And let's check out the steps.

As the Microsoft Teams meeting recording is unavailable for anyone to proceed, you have to ensure that you have met the following qualifications before getting started with the official method to record Teams meetings:

As you have double-checked that you are available to record Teams meeting, it's time for you to proceed with the recording process with the manipulation guidance provided below. Here will show you the correct process to start and control recording meetings on Teams.

2. As the meeting gets started, on the controlling bar, click on to proceed to record the meeting by tapping the Start recording option.

3. Once again, you can end the recording here as the meeting is over. 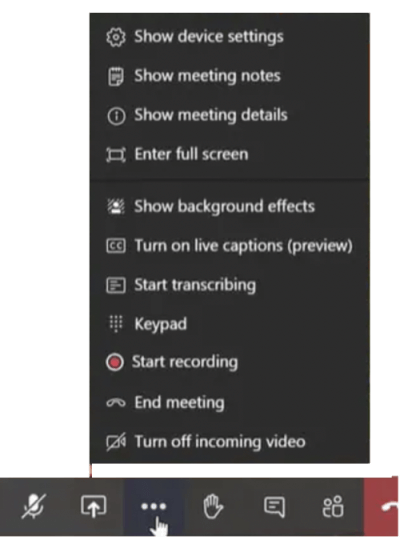 After Recording: Where Does Teams Save Recordings

Based on the type of the meeting, the recordings would be saved in different places:

3. How to Record Teams Meeting Secretly

A great downside of utilizing Teams' built-in recording feature should be its recording notification. When you proceed with the recording, everyone who participated in the meeting would be notified that the recording is started. Therefore, if you consider recording Teams meeting secretly, FonePaw Screen Recorder turns out to be the best program for you.

In the following, the procedures to control FonePaw Screen Recorder to record the Teams meeting would be introduced explicitly to you.

You can utilize the Task Schedule to enable the auto-recording without manually controlling it.

As the Teams meeting starts, press the large REC button in FonePaw Screen Recorder to proceed with the recording. During the recording, you can use the drawing panel to take notes for not to miss any important points mentioned in the conference.

Step 3. Save the Teams Meeting Recording

When the meeting ends, simply tap the stop button on the controlling bar to end the recording. Subsequently, only by clicking on the Save button, and the meeting recording would be stored locally on your computer.

Why is the Microsoft Teams Start Recording button greyed out?

When you notice that the Start Recording button provided in the Microsoft Teams is greyed out, it probably means that the storage path for storing the recordings has been altered, or there occurs a policy change. Otherwise, when your account doesn't meet the qualifications to proceed with the recording, you would also find that the Start Recording button is disabled and appears in grey.

Who has permission to record Teams meeting?

As introduced in the first module, only the users who are the meeting organizers, company employees with permission from the ID admin, and the users with Office E1, E3, E5, and 365 Enterprise licenses would have the permission to record Teams meeting inside the app.

Teams allow people to share the recorded conferences with those who are not invited to participate in the meeting. The meeting organizers just need to access the recorded files in OneDrive or SharePoint, then copy the links and directly share them with anyone you like. If you are not the meeting organizer, you would be asked to gain approval from the host before sharing the recording links with other people for getting access to the content.

Recording Teams meetings is an easy job, as both the official and the awesome third-party screen recorder could both be your help. With these 2 methods, you don't need to worry about missing any important notes in a Teams meeting. Just put them into practice in the upcoming Teams conference!