Guide to Record iPhone Screen in iOS 11 (No Jailbreak)

We used toneed either a third-party iOS screen recorder or a Windows/Mac computer to record iPhone/iPad screen. As iOS 11 include a newScreen Recording feature in Control Center,you can now to capture iPhone/iPad screen natively with no computer and no jailbreak.

How to Record Screen on Windows and Mac (opens new window)

1. How to Enable Screen Recording on iOS 11

Before recording iPhone/iPad display, you need to able screen recording button on Control Center. The followings are the steps to enable Screen Recording on iOS 11.

Step 2 Navigate to More Control, where you can find Screen Recording.

Step 3 Tap the green plus icon before Screen Recording to add it to Control Center panel. 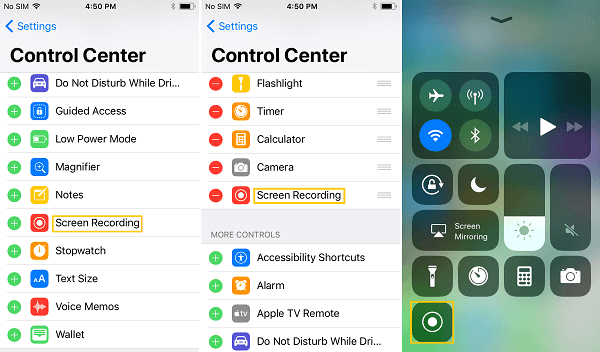 2. How to Record iPhone/iPad Screen on iOS 11

Now you can record iPhone screen screen on iOS 11. The method also work for filming screen video of iPad Pro/Air/Mini that runs on iOS 11.

Step 1 Swipe upward on the screen to access Control Center.

Step 2 Tap Screen Recording icon and the icon will become red, indicating the screen recording is on.

Step 3 To record screen with sound, long press the Screen Recording icon. On the new pop-up window, tap to turn on microphone. 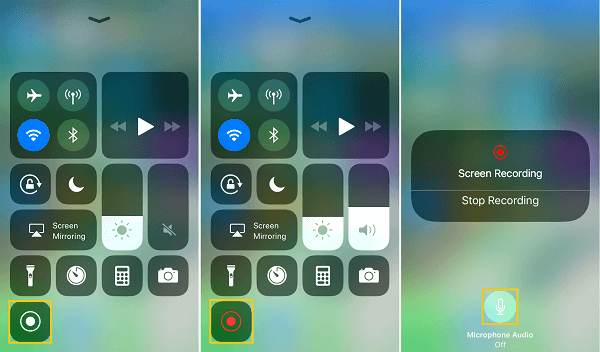 Stop Screen Recording of Your iPhone

When you are done recording your iPhone screen, there are three ways to stop the recording. 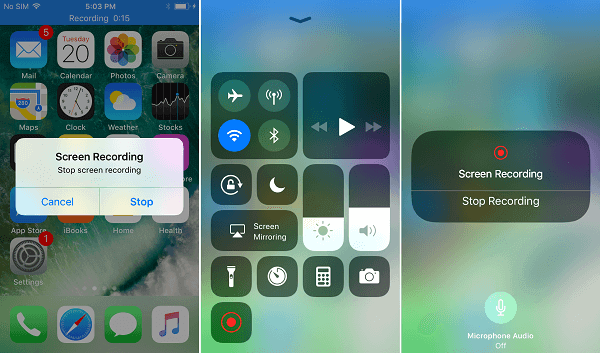 3. How to Edit Screen Recording Videos

Before sharing your screen to Instagram, Snapchat or other social media, you may want to edit the video to make it cooler and more fun. The first thing you may want to do is to cut the video and delete the unneeded part, such as the beginning and ending which capture how you start and stop the recording.

Step 1 Open Photos app on your iPhone and choose the recording video.

Step 2 Tap on on editing icon.

Step 3 Move the black arrow iconson the two ends inward to trim out the part you want.

Step 4 After you have done editing, tap Done and choose Save as New Clip. 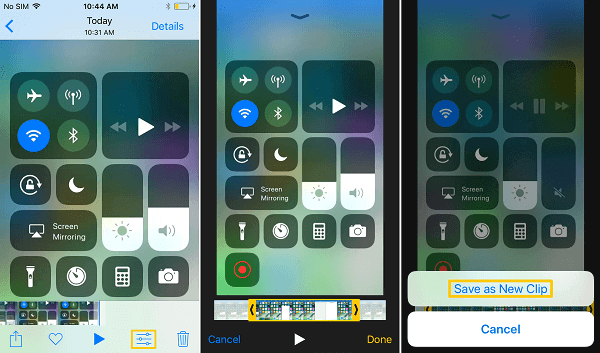 But that's all you can do with iOS's built-in video editing feature. So if you need to further edit the screen recording video, such as to add watermark, crop the video, convert it to other formats, rotate/flip the video, change its brightness, contrast, saturation and more, you want to edit the video on computer with FonePaw Video Converter Ultimate (opens new window).

If you have an iOS device that won't get iOS 11, like iPhone 5, iPhone 5C, or fourth-generation iPad, you need a good screen recorder for iOS 10/9/8 to record iPhone/iPad. Here I recommend ScreenMo (opens new window), which also works for iOS 11. The program can mirror and capture iPhone/iPad screen on Windows PC without jailbreak. It is very straightforward and has more functions than Screen Recording on iOS 11. 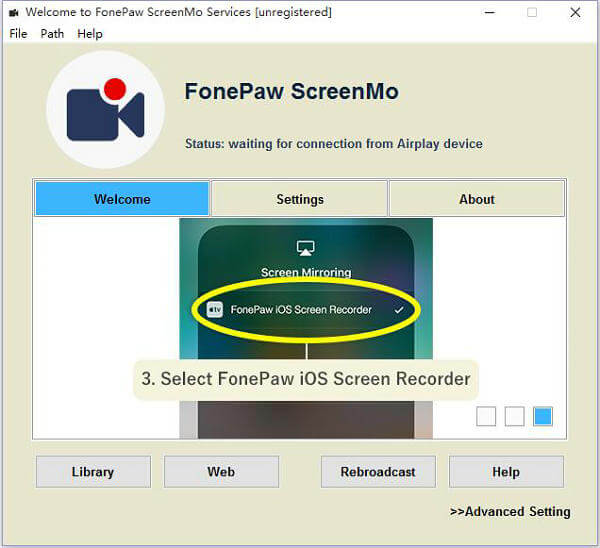 And the ScreenMo is now free to download and use. Why not get it on your PC right now to start recording your iPhone/iPad screen?