"How can I connect multiple iPads on one PC for presentations?"

"Can I share my Mac screen and iPhone screen on my Windows?"

People ask for a way to wirelessly mirror multiple iOS devices to Windows PC. You are able to mirror iPhone/iPad to Mac with QuickTime easily. However, connecting and mirror multiple AirPlay devices such as iPads, iPhone, Macs to PC is not a easy task as Windows PC doesn't carry AirPlay component.

So is it possible to display iOS screen to Windows PC? The answer would be YES! All you need to do is getting an AirPlay receiver for Windows. Using a PC mirroring software such as FonePaw ScreenMo, AirServer Mirroring or Reflector 2 can be a good choice to mirror iOS devices to PC. As most of the mirroring apps share the some features for the task, so in this post, I'll show you the way to airplay iPhone, iPad or even Mac to Windows with the one I like best - FonePaw ScreenMo.

Now, let's see how to utilize the recommended AirPlay receiver to connect multiple iOS devices on PC in details.

FonePaw ScreenMo (opens new window) is an effective screen mirroring software as well as the iOS recorder that will help users display/mirror and record iPhone/iPad screen on computer. Let's take a look at what it can do for us:

Below are some steps on how to wirelessly mirror and airplay iOS devices to Windows PC.

To begin with, you need to download and install FonePaw ScreenMo program on Windows PC by clicking the following button.

After you download and install the program, please launch it on your computer. Then you need to connect all your iOS devices as well as PC with the same Wi-Fi network.

On your iOS devices, you should swipe up to reveal Control Center and then choose AirPlay Mirroring /Screen Mirroring. The AirPlay receiver on your PC would be detected and displayed as "FonePaw iOS Screen Recorder [your computer name]" on iOS devices. Tap on it and you will get iOS and the computer connected.

Now, your iOS devices should be automatically displayed on PC. You can see different mirroring windows there. For example, you can share an iPhone screen and two iPad screens or more on the Windows. Besides, you are allowed to expand the windows with clicking the zoom-in button.

Tips: You can also record the iOS screen with the program and the recorded videos would be saved as MP4 on your computer. 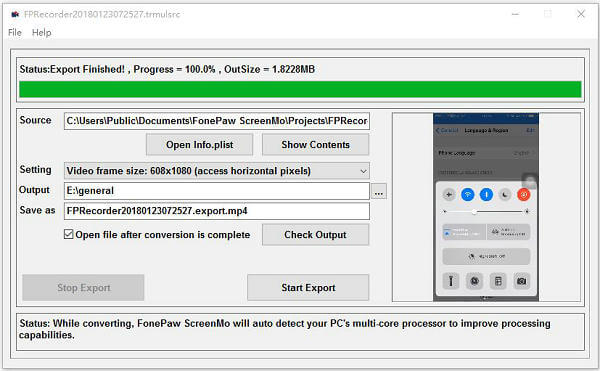 Above is the whole guide to mirror multiple iOS devices or even Mac screen on Computer. If you need to display iPhone/iPad screen to PC, why not download the best mirroring software and have a try? Please leave us a message on the comment area to share your own idea!